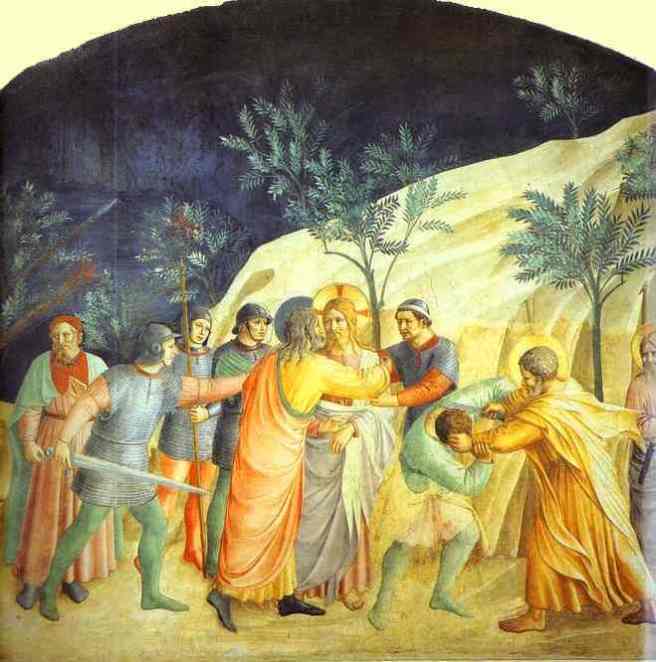 Malchus was getting dressed for work and tonight it was the graveyard shift.  This was his favorite shift as it allowed him to be with his children in the evening, in the morning after he came home from work and then he could sleep during the day while they were schooled or playing.

For some reason tonight he was a bit apprehensive.  He had heard rumblings that tonight they were going to be looking for a criminal.  He was hoping all would go well and he could be home in time to see the children before getting some sleep.

By the time he got to Caiaphas’s house they were getting their instructions for the night.  The entire guard was to gather their torches, weapons and lanterns and head out for the garden by the Kidron Valley.  It had already been arranged with Judas (who was one of this man’s followers) that he would point out the one they were to arrest with a kiss.

It was interesting to Malchus that the whole group of them didn’t know by sight who it was they were going out to arrest.  If this was such a bad dude wouldn’t he have been watched? Tracked? Have a record?

Line up and march!  Get to the garden as quickly as possible and lay in wait.  Suddenly as they arrived a man stepped out of the darkness and asked “who are you looking for?”

It just goes to prove they didn’t know him!  They did answer the question and said, “Jesus from Nazareth”.  Jesus said, “I am He.”

WOW!  When He said that Malchus found himself on the ground.  In fact ALL of them fell backward including Judas!  It was a miracle they didn’t start a brush fire with their lanterns and torches or fall on one another’s spears!

Malchus didn’t have any idea what happened. When Jesus answered the question it was as if the simple revelation of Who He was/is overwhelmed everyone there! He hurriedly gets up, brushes the dirt off his uniform and grabs his weapon to be ready for a standoff.

In the melee that followed, Peter, one of the followers of the man they were to arrest, whipped out his sword and began slashing it through the air probably hoping to get someone’s neck.  Because of the aftermath of Jesus declaring “I am He” and seeing all the men on the ground, Peter must have thought he could add to the drama and help protect Jesus.

However Malchus, seeing the sword coming for him, ducked just in time to save his life but he lost his right ear.

Now Malchus grabs the side of his head as blood flows down his tunic.

Just as quickly as it happened, Jesus reprimands Peter and tells him to put his sword away, and then, wonder of wonders, Jesus picks up Malchus’ ear and puts it back on the side of his head!!!

I see Malchus pulling on his ear … yes it is tight!  No fresh blood.  Yes, he can hear.  What is going on?

Question … what do you think Malchus talked about when he got home the next morning to have breakfast with the family? He had a “wound” but experienced a “miracle” on either side of the wound.

Did he yell and scream and talk about the abuse he suffered at the hands of a “Christ follower”? Or did he talk about when Jesus said, “I am He” that at the revelation of His person they were unable to stand in His presence?  Or how, following his injury, this man Jesus picked up his ear and healed him?

Let me ask you … what would you have talked about?

We are all surrounded by miracles.  There is the miracle of life.  Just the fact that we are still alive is a miracle.  Healings from disease. Those of us who have experienced salvation … that is a miracle. Watching the birth of a baby, another miracle.  The sun coming up every morning.  The tide washing in.  The stars staying in place.  Miracles ALL around us.

But on the other hand none of us can go thru this life without being hurt or wounded.  Impossible!  Betrayal or battering by a spouse.  Sexual abuse.  Abandonment by a parent.  The loss of a job promotion. Divorce.  We could make a long list but the wound always hurts worse when made by a “Jesus follower”.  We expect more of them.

When we look around at our life there are far more miracles if we would look for them as there are wounds but so often we live in the world of the negative and dwell on all that’s wrong instead of all that’s right!

I want to believe that when Malchus arrived home he gathered the family around him and said, “I must tell you what happened to me last night.  We went to the garden to arrest a man called Jesus.  You may have heard about Him around town and the miracles that He has done and that He preaches repentance and to get right with God.  Having never seen Him, we didn’t know what He looked like so when we saw this man in the garden He asked us, ‘who are you looking for?’  Someone in the group said, ‘Jesus’ and He answered, ‘I am He’.”

“You won’t believe this but when He revealed Himself every single one of us fell backward to the ground!  It was truly amazing.  It was almost like His persona was so powerful that we couldn’t stand! Then one of His followers thinking that he could defend Jesus from being arrested, whipped out his sword and it was coming right for my neck when I ducked but he got my ear and sliced it right off my head!”

By this time the kids eyes were as big as saucers, his wife gasped but he quickly reassured them, “Hey, don’t panic!  Look, it was this ear.  I’m pulling on it, I can hear and you know why?  Jesus stooped over, picked it up, put it back on my head and healed me! He HEALED me!”

“I forgave the dude who did it to me because he was just doing what he thought he had to do.  He was one of Jesus’ guys but Jesus reprimanded him for doing wrong and then healed me.  It was just incredible!”

What are you talking about?  Are you rejoicing in the miracles surrounding your life or do you constantly relive your wounds and scars? Do you run people off because all you can talk about is the negative?

My challenge to you … forgive those who have hurt you.  Begin to live in the realm of the miraculous.  Don’t live in the world of hurts and wounds.  Let Jesus bring healing to your life and to your emotions.  Give up the negative and live in God’s positive!

Let the scars just be a reminder to you of the healing Jesus brought to your wound.

(THANK YOU to my husband, Ronn, for his original sermon on this account of Malchus … I have used it many times!)

One thought on “Scar or Miracle”